Tech Tip: Windows 8 can seem so different and difficult to find all the common settings in which we are familiar with Windows XP and 7. But try this out! Move your mouse down to the bottom-left corner of the screen and then right-click! Just about everything a die hard Windows XP user could want is right here at your finger tip! Yay for dat!

This is a common question and problem with several small businesses. There is a specific use for each of these devices.  If they are implemented improperly, you can inadvertently disable your network and force you to call for support. We all know that support = $$$, so let’s see if we can try to help you avoid this situation.

What is a router?

A router is a device that is specifically designed to connect two networks together. Typical network installations require only one router. In this example, the router connects your business network to the Internet. As with most retail type routers, they have wireless built-in which simply provides an additional way for PC’s to connect to the business network and ultimately the Internet. PC’s and laptops can plug in directly (or through a network switch) to the router or connect wirelessly to gain access to the network.

Why can’t I have two wireless routers?

In addition to connecting your network to the Internet, a wireless router also (typically) provides DHCP (Dynamic Host Configuration Protocol) for your network. DHCP is a service that assigns IP addresses to the PC’s and other devices on your nework. Without a proper IP address, your PC will not be able to communicate on the network. Here is where the problems start. If you put an additional wireless router on your network to extend your wireless coverage, you now have two DHCP servers! Imagine having two police officers at the same intersection directing traffic, but neither officer knows what the other officer is doing. As you can imagine, this will most certainly cause a problem.

There are some instances where multiple routers are needed, but they must be configured properly for them to play nicely together. Also, some routers can be configured to “act” like an access-point, but you will likely need an experienced IT professional to configure it and make sure it does not interfere with primary router’s function.

For businesses that have local network servers with Active Directory (Microsoft Servers), DHCP should be running on the server. This changes the dynamic of the network quite a bit and should be taken into consideration when installing routers and access-points.

Yes, when you search for Baton Rouge Web Design, we are ranked #1 with Google for a reason. There are many things that need to happen in order to increase your ranking and we know what it takes. Being first is fun, but you also have to look at who is not. There are many other firms that are much larger, have more resources, and are actually very talented. But you have to ask yourself, how was aeTechnology able to beat out all the others and why don’t they charge as much? We are a very small web design firm, but we’ve got it where it counts.

Is your domain name registered properly?

You know what websites can do for you, but you don’t necessarily know how to go about getting one. You hire a website firm (or maybe a cousin or brother-in-law) to register your domain name, set up your hosting, and build your website for you. BUYER BEWARE!

You need to make sure your domain name is properly registered in your name and company name! This probably happens more than we care to know. Whoever is setting up your website, might actually register your domain name using their information and sometimes even under their own account. This is a very poor practice and even unethical in my opinion. Of course its never a problem until its a problem. Later down the road, you decide its time for a change for whatever reason. You’ve hired someone new to redesign your website or move your hosting to something more affordable. The original person you hired gets offended and refuses to help transfer the domain.  Maybe this person has fallen off the face of the earth or even gone out of business. You’re now stuck like Chuck.

You have no login information to the registrar where your domain sits idle. You try to call the registrar and you are informed that you are not the registered owner of the domain. Unless the registrar decides to be nice or you hire an attorney, you have just lost control of your website.

At a minimum, you must insist your domain name be registered to you and your company. The website design firm can be listed as a technical contact. If possible, you should insist on having your own account with the registrar and supplied with the username and password to manage the domain name. This will allow you to take control of your website just in case. Here at aeTechnology, we set up your own account, with your own login, and register the domain name using your information.  We manage it for you without additional charges and you can take over anytime you like. We do not hold websites hostage nor do we copyright the design. You paid for it. Its yours to do whatever you like. It’s April 1st today, but don’t let another website company fool you. Its your domain name! Not theirs! 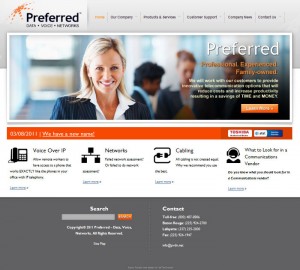 We are pleased and proud to announce the launch of the redesigned site for Preferred – Data | Voice | Networks, formerly Preferred Telephone of Baton Rouge. Since 2007, Preferred Telephone Systems, Inc. has partnered with aeTechnology to provide IT solutions and support to their customer base. We originally designed the Preferred Telephone site back in 2007, and it was a privilege to be given the opportunity to grow with Preferred as they have expanded their product offering and started operating under a new name.

Preferred designs innovative communication options for customers to reduce costs and increase productivity. They have built a team of knowledgeable and highly trained personnel, focusing on customer needs for today and into the future.

Our latest WordPress website gives our customer control over their content, allowing them to present timely information to their customers. The blog functionality was implemented for the Company News page.

Having trouble sending an email?

The bounce-back message you receive provides valuable information to help determine the problem.

The most common message I see is the misspelling of an email address. Even if you have sent an email to the person before, it is very easy to misspell an email address. Once you have misspelled an address once, it will show up in your Most Recently Used (MRU) list in Outlook when you start typing the address. If you select the misspelled email from this list, you will receive the same bounce-back message again and again. Sounds simple, but it snares more people than I care to mention. You can delete the previously misspelled email address from your MRU in Outlook by using the arrow keys on your keyboard to highlight the email address, then pressing the Delete key on your keyboard.

Aside from that, there are several other errors that could be the cause of the bounce-back message. Please read it carefully to get a better understanding as to what might be happening. Do not assume that your email is just broken. It could be rejected as SPAM or some other fatal error. If you need help, feel free to call us and have the bounce-back email handy so we can help troubleshoot.

Facebook is no longer supporting Application Tabs on Personal or Business Profiles. Facebook Fan Pages are not affected. Our clients will not be affected by this change for the most part, but contact us if you are not sure.

Facebook has stopped supporting adding Application Tabs to Facebook Profiles as of October 13th. They’ve also announced that as of November 3rd, 2010, they will begin deleting existing application tabs from all Profiles.

If you need help adding the “Join My List” tab to your new Facebook Fan Page, read the Constant Contact FAQ, or give them a call. They will be happy to help you through the process. Or, contact us if you would like to have us help you with your social media initiatives.